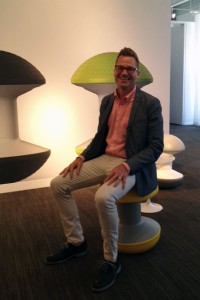 After a group of young designers told Jon Strassner that they had never been to NeoCon because they couldn’t leave work during the day, the director of A&D North America for Humanscale decided to get a group of manufacturers together to give them their very own night. So this Tuesday young designers can do what Strassner is calling “a NeoCon crawl of showrooms” from 5pm to 8pm that include Humanscale, Vitra, Bernhardt Design, Milliken, Carnegie Fabrics and Davis Furniture.

“I mean these are the people looking for product solutions, the guys who are getting down and dirty,” says Strassner, adding that about 230 young desingers have so far RSVP’d for the event. As an added incentive, each designer who shows up will be eligible for one of 50 $100 gift certificates that the showrooms will be handing out that night.