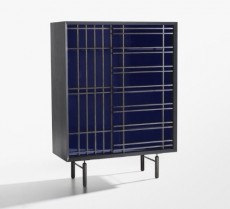 Once again Potocco, the excellence of Made in Italy, is expanding its horizons and will be present at the Salone del Mobile.Milano with a collective story that takes on multiple forms through projects interpreting the company’s style, paying tribute to its roots but at the same time transforming them with a new and modern approach, thanks to a fine team of designers.

The company inaugurates new partnerships with Oscar and Gabriele Buratti, Chiara Andreatti, Antonio Sciortino and Maurizio Zucchi, Terri Pecora and Serena Confalonieri, while on the other hand, those with Mario Ferrarini, David Lopez Quincoces and Bernhardt & Vella have once again been confirmed.

A project that started from the reinterpretation of the Shoji, the traditional Japanese rice paper doors, is expressed through the language of light and dark in a careful balance between the material and the ethereal.

Inspired by oriental aesthetics, SEN is distinguished by an unprecedented visual lightness given by the intersection of ash gridwork, which applied to sliding doors in bronze or blue coloured glass with a pleasant translucent effect, to create original combinations of superimposed graphisms. Presented in a lead grey ash and aniline beige finishes, behind a rigorous geometric pattern, SEN conceals shelves at various heights suitable for preserving and putting order to precious objects in the living and dining room. The four essential feet in ash raise the structure emphasising the airy presence of containers that appear as if they were suspended.

The passion for craftsmanship of Chiara Andreatti meets the skills of the company in manual work, giving life to the ROPU collection of poufs and tables.

From exotic recollections, ROPU stands out for its sophisticated woven border in an eye-catching texture in hide or nautical cord running along the perimeter structure composed of metal rings, creating an ultra-chic frame for marble and hpl tops or soft cushions with mouse-tail cord profiles. With a four-legged metal base, the collection consists of a coffee table version with rectangular or round top and rectangular pouf to be used individually or in bold combinations of shapes and colours. A transversal project with a feminine touch, ROPU creates a unique environment between indoors and outdoors for convivial moments and relaxing outdoor breaks.

Inspired by the 1950s, the LOOM sofa by David Lopez Quincoces is presented this year in the new modular version that allows choosing between central, corner and terminal elements to create the desired solution. Minimalism and elegant simplicity define the project: to draw the profile is an essential mahogany frame enclosing a refined cane weave for the indoor version or “Gassa” and synthetic rope for the outdoor version, echoing a traditional craftsmanship and expression of a profound manual ability. The materiality of the external frame contrasts with the almost ethereal lightness of the internal padding without compromising comfort in any way, thanks to the deep seat that embraces and protects like a nest. Its discreet and light presence, also emphasised by the four slender legs, makes LOOM a suitable proposal for a double indoor/outdoor use that expresses finesse, the desire to get away from it all and being carefree.

Reference to the tradition for the David Lopez Quincoces VIGO lounge chair with which the designer reinterprets the great safaris of the ’20s/’30s in a modern key. Working on tubular metal structures and full-grain leather, the project brings minimises recalling the aesthetics of the objects of that era. The light seat that appears as if it is suspended in a vacuum inside the essential structure that supports it, gently accompanies the body contour to enjoy moments of maximum relaxation. A proposal that leaves no room for the superfluous but seeks the essence of elegance giving a touch of class to your living.