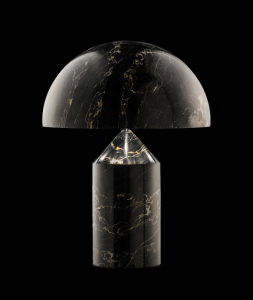 Atollo Arte is a project promoted by Oluce, curated by Nicola Di Battista and developed with the collaboration of the Fondazione Vico Magistretti, to celebrate the 40th anniversary of the iconic lamp.

Enzo Cucchi, Mimmo Paladino, Michelangelo Pistoletto and Ettore Spalletti – four great names in contemporary art – have been called upon to “pay homage to the Magistretti lamp by creating their own interpretation based on it, which portrays their understanding of the meaning of Art”. (Nicola di Battista). What is produced – to quote the curator Di Battista – “is, in the end, a genuine tribute to the iconic form of Atollo, interpreted by the different sensibilities of the artists who have taken part in this game, in a very serious way. That is why we give them our heartfelt thanks.

“We have Mimmo Paladino, who greatly changes the shape of the lamp, redesigning its entire spatial configuration and thus creating a completely new object; or Ettore Spalletti, who adds a subtle sign to the lamp’s perfect curve, simply caressing it; or even Michelangelo Pistoletto, who chooses to add another form to the original lamp, prompting us to think critically about the very idea of artificial light” Nicola Di Battista 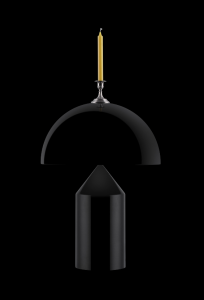 In addition to the designs by the artists taking part in the Atollo Arte project, the company has decided to pay tribute to the Atollo by producing a version of the famous lamp in portoro, the precious Italian marble from the Ligurian area of Porto Venere. This spectacular piece has been made from a single block of stone, carved and finished by Italy’s top master marble workers. The special use of portoro – with its intense black colour and golden veining – aimed to give the simple geometries of Magistretti’s lamp a more pronounced decorative and sculptural element, underlining the celebrative aspect of this model.