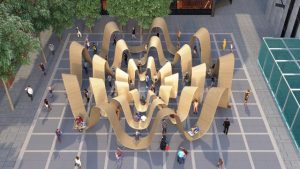 London Design Festival once again gears up to celebrate and promote the city as the design capital of the world. The 20th anniversary edition will take place between September 17–25. This year, London Design Festival celebrates its 20th anniversary. The Festival will once again provide a platform for designers and creative businesses to showcase their work, and will invite a global audience to discover the breadth and diversity of talent found in London and across the UK.

Since its initiation in 2003, the Festival’s vision has been to celebrate and promote London as the design capital of the world. It has played a key role in the growth of the design industry, bolstering London’s position as a global destination for business, culture and tourism, and contributed to the UK’s reputation as a creative powerhouse. As one of the world’s leading design events, the Festival has also served as the blueprint for design weeks and festivals globally and continues to be a key moment on the cultural calendar.

A truly democratic event, the Festival is predominantly free and audiences have increased year-on-year with the 2019 Festival reaching 1.1 million visits by 600,000 visitors, with more than one third of them from overseas, representing 75 countries.

In addition, the 2019 Festival contributed an estimated £118 million in GVA to the London economy, 2,992 FTE jobs and a much needed platform for over 2,500 businesses by delivering audiences directly to the doors of both small and established creative businesses.

Sir John Sorrell CBE, London Design Festival Chairman, said: “We consciously founded the London Design Festival to be public spirited. Different from other design events, we not only aim to support designers by helping them showcase their work and generate business, but importantly to create an understanding and appreciation for the creative industries by as wide an audience as possible. Over the last 20 years, the Festival has had incredible depth of penetration and success in bringing people together and distilling new ideas.”