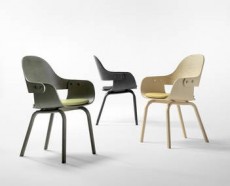 The Showtime Collection by Jaime Hayon was introduced for the first time in 2006. At the time, Hayon was still an emerging designer. Showtime was his first chair to be produced and commercialised by a company all over the world.

Now a decade later, the designer has partnered again with BD to launch a new version of the Showtime chair, which does not make the original design obsolete, but rather compliments it.

The chair’s name is Showtime nude with wooden legs, and is presented with a nearly nude appearance. The shapes are slightly different but visibly more organic, developed and matured, much the same as the designer’s works during the years.

Launched at the Salone del Mobile 2017, the new chair is presented in different finishings – natural or stained wood and a simple cushion as its sole accessory.

BD Barcelona is also going to present Hayon’s Showtime nude at the Clerkenwell Design Week from May 23 to 25.