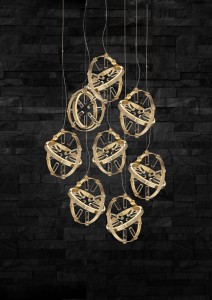 This September, Baroncelli will be marking its twentieth anniversary at the London Design Festival 2014. As part of the celebrations, we are returning to lightjunction at designjunction, the first London-based trade show dedicated to high-end decorative lighting – followed by Decorex International, the globally acclaimed and established home for luxury design.

We are thrilled to continue our association with the designjunction brand after the success of 2013 and EDIT by designjunction in Milan earlier this year, where we launched new additions to the innovative lighting range FLEXUS. For lightjunction 2014, our new Flexus products will be seen in London for the first time – including the ARLO family, now available as a chandelier, table lamp and wall light.

We are excited to be part of Decorex International as the show returns to its historic location in Syon Park. Our signature SATURNO pendants will take centre stage, tumbling through the space in a long, travelling arrangement against a vibrant teal backdrop. The recently launched Saturno table lamp and wall light will showcase the black nickel, copper and gold metal finishes now available. Our ATOMOS pendant will also feature alongside the matching wall light, making its debut appearance for LDF 2014.