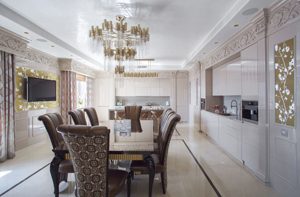 In the top two stories of a building in Moscow’s South area, with stunning views over the Vorontsovsky Park, this rooftop penthouse is what dreams are made of. Designed by Ciliegio Interior, this house counts with an area of 700 square meters and is the epitome of luxury, with an indoor pool, high ceilings and large panoramic windows uniquely decorated by this interior design firm.

Art Deco, Luxury and Modern are the styles that describe this penthouse the best, together ensuring not only a gorgeous but also practical and functional design, taking
into the account the owner’s preferences and needs. LUXXU’s sophisticated pieces are seen throughout the home, such as the powerful Empire Center Table, whose top beautifully reflects the outside views.

The first floor of the penthouse features a spacious living room which includes the marvelous Empire XL Chandelier, granting character and impudence to an already grand space. 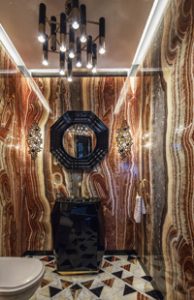 The golden hues of the chandelier match seamlessly with the details of the living room and the accent dark blue shade of the couches and curtains.

The first floor also includes a kitchen and dining space decorated in beige shades and golden accents, such as the Waterfall Rectangular chandelier and the Burj chandelier, both of which act as the rooms centerpieces and uphold the bold and eccentric ambience throughout the penthouse.

The private rooms, such as the bedrooms and bathrooms, are located in the second floor of the penthouse and maintain a sleek, understated yet luxurious look with the help of LUXXU’s lighting fixtures, such as the Empire Suspension lamp which accentuates the colder shades of the bedroom.