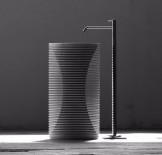 Designed by Paolo Ulian, the idea of the Introverso washbasin was born by observing the workmanship of blank marble sculptures, in which the three-dimensional shape of the sculpture is outlined in steps and various depths of a diamond disc managed by a numerical control machine.

The same process is used in the realization of the Introverso sink: a white Carrara marble block, machined and lightened by a series of cuts that reveal its internal core, the shape inside the shape.

The marble block loses its monolithic appearance and is transformed into something ethereal, transparent, enclosing a core secret. A soul that can remain hidden, leaving a glimpse of the subtle play of light, or it may be slowly unveiled by breaking the edges of the blades.