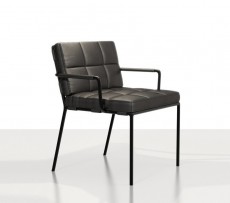 The new collections from Tacchini Italia aim to transform every space into a comfortable place, where it is a pleasure to spend time. For Salone del Mobile 2018, the company has once again collaborated with the world’s leading designers, developing solutions suitable for both domestic and contract markets.

Among the novelties of Tacchini Italia 2018 Collection are Memory Lane by Christophe Pillet and Julep by Jonas Wagell. There is also the re-edition of the Tacchini 831 armchair by designer Gianfranco Frattini, named Lina.

Christophe Pillet has designed a timeless, all-round chair, yet very simple in its design. The elegance of Memory Lane lies in its simplicity: the slender metal structure and the refined quilted padding, with elastic straps that remain visible in the back of the seat. The concept of this chair is to allow beauty and comfort to coexist.

A family of upholstered sofas characterised by soft and enveloping shapes and by a contemporary, romantic and feminine allure, Julep is inspired by the Avant-garde furniture of the Fifties, from which it recovers its simplicity and majesty. The family’s showpiece is the sofa, with its rounded and generous shape, from which the entire collection has then developed – an armchair, a three seater sofa and a footstool – in a game of proportions and volumes which has led to many expressive variations – like the three seater sofa featuring an oversize seat and the sofa with an integrated chaise longue. Fully upholstered, the seats look warm and voluptuous, yet light, thanks to their recessed base which lifts them invisibly from the ground. Their welcoming appearance invites to intimity and rest.

The 831 armchair is one of the first pieces of furniture designed by Gianfranco Frattini – master of the italian Design who will be celebrated this year by the Triennale during Milan International Salone del Mobile – and that has been re-edited by Tacchini on the occasion of Milan Design Week 2018.

Produced by Cassina in 1954, the 831 armchair was flagged the following year for the Compasso d’Oro Awards and it’s characterised by a very particular wooden structure that gives it a solid yet light appearance at the same time.

Thanks to the curved multi-layered element, a very innovative process for the time, which allowed a single slab of wood to support the side of the backrest and to bend and become the support wing for the armrests. The Tacchini re-edition proposes the same processing in ash, dyed gray or walnut finishes. The wooden structure that supports the seat and the backrest, is made of leather, fabric cloth or velvet. The connection studs are still visible.