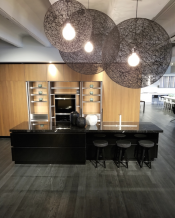 Italian brand Scavolini has doubled its size in New York and inaugurated its second single-brand Store along with new offices on Fifty-eighth Street, on the fifth floor of the exclusive A&D Building, which already houses the most famous design and contract brands in the world.

The Store, located in the heart of the city, boasts a surface area of approximately 650 square meters, set to showcase all the latest news from the Scavolini brand: the Liberamente, Carattere, Evolution collections from the Kitchens line, and Font, Rivo and the special home Laundry Space collections for the Bathrooms line. The versatile range for both kitchen and bathroom designed by the Japanese studio, Nendo, will also be on show. The display will be completed by the Fluida wall system and an area dedicated to the rugs from the Living room collection. The entire display is devised best to represent the product range and the values which have ranked Scavolini among the market leaders and as a reference brand across the globe for more than 50 years, owing to its quality Made in Italy, painstaking attention to detail, impeccable design and maximum freedom of composition.

With the opening of this new store, Scavolini further consolidates its presence in the USA, which is a key market. Scavolini USA has about twenty points of sale, including Boston, Washington D.C., Chicago, Las Vegas, Miami and the Scavolini Soho Gallery in New York, the flagship store spanning almost 1,000 metres located in Soho. This market is quickly expanding for Scavolini thanks also to the positive growth of the contract sector, where the Brand is playing an increasingly significant role.

Gian Marco Scavolini, Chairman of Scavolini USA, says, “The opening of the new Store and of the new offices in the A&D Building, a facility that is entirely dedicated to architects and designers, bears witness to the brand’s desire to head up this segment and its objective is to reinforce liaisons with major international studios headquartered in New York. The USA are currently one of the countries where we are growing most from this perspective; only last year we supplied our furniture for four luxurious residential buildings in New York that boast approximately 1,200 homes. We are also present in prestigious buildings in all the major cities across the globe, including Beijing, Los Angeles, Toronto, thanks to a significant competitive edge: a top-quality offering totally Made in Italy, a distinguishing feature that has proven popular all over the world.”

Fabiana Scavolini, Chief Executive Officer of Scavolini adds, “The contract segment is a market we strongly believe in, in which we are investing huge resources. It is an important part of a wider growth plan that our Group is implementing on a world-wide scale. These days, Scavolini is an increasingly global brand, the number one Italian concern in terms of modular kitchen exports. We sell all over the world, with a policy targeting the strong expansion of our network, which spans all five continents, confirming our leadership of the kitchens sector not only in Italy but also abroad.”

Scavolini Store New York is a fundamental milestone in the development of the American market, which includes over 50 points of sale, 30 of which are in North America and 20 in Central/South America. On a world-wide scale, Scavolini is present in over 50 different Countries with more than 300 showrooms.