Lasvit is a brand that is well-known for its unique works of glass, including bespoke lighting installations. It is coming to MAISON & OBJET 2016 PARIS ready to introduce some new collections. 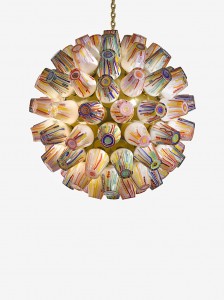 The Campana Brothers found inspiration for this collection in the colorful candies sold in popular markets in Brazil. This initial concept was enthusiastically received by Czech glass-masters, always ready to explore new techniques and visions. The Candy collection includes Sphere chandelier, Ring chandelier and Lollipop table lamp, all conceived and produced in hand-blown glass and metal. 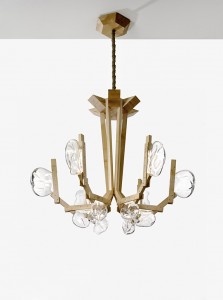 The Fungo chandelier was inspired by the fascinating shape of a mushroom growing on wood. Yet this mushroom didn’t grow in the forest, but was discovered in the basement of Lasvit’s glassworks, where an ancient wooden glassblowing mold had succumbed to the ravages of humidity. The Campana Brothers chose to blend this newfound accidental theme with Lasvit’s glassmaking tradition and fuse their techniques with natural materials. The resulting artwork displays a striking contrast between the formal rigidity of the chandelier’s wooden structure and the blown-glass that appears to emerge spontaneously from the wood. 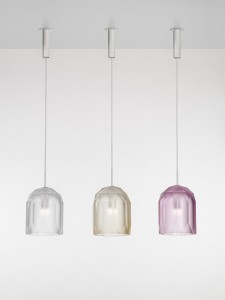 Polygon expresses light, glass and the glass-cutter’s art in perfect harmony. Combining the traditional shape of a hand-blown glass lampshade with the polygonal network often used in 3D modeling programs, Polygon creates a new and unusual décor with two distinct looks. In the daytime, light gently refracts from its matte surface, while at night the interior light source reveals the elegance of the design in full detail. 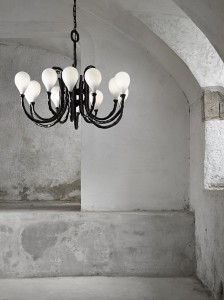 With the ‘Das Pop’ chandelier, Maarten Baas looks to classic, recognizable shapes, yet with a modern and almost comic twist. Technically, it’s a unique joint-venture between two crafts, the classic hand-blown glass by Lasvit and the clay-covered arms by Baas, along with his production team from Den Herder Production House. Emphasizing random shapes, Das Pop combines the personal and non-industrial feel of the product. Modular components of the chandelier provide an opportunity to create variations within its ﬁxed structure. 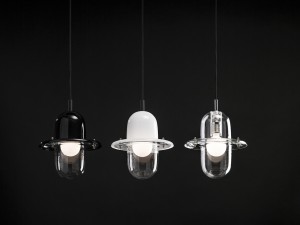 Reminiscent of the late Victorian bowler hat, Hats concept combines the demand for absolute practicality with simplicity of design. Inspired by the industrial lighting and street lamps in European cities, Hats carries a subtle sense of familiarity. Its transparent colored glass topper lights the ceiling while the clear bottom is starkly utilitarian. Hats’ sections are connected by three industrial-style custom screws, paying homage to its original inspiration. Inside, a translucent light bulb softens and evenly distributes the light. Hats is the ideal designer-light for even the smallest interiors or a perfect unit to combine into groups.