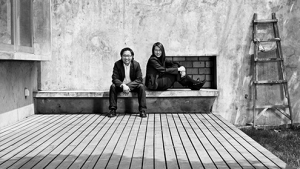 The imm cologne brings the China-based Neri&Hu Design and Research Office, one of the most influential creative teams in the world, to Germany. After the unique interpretation by the Danish designer Louise Campbell, characterised by a romantic purism, the Shanghai-based architects Neri&Hu will write the next chapter and lend a completely new and exciting perspective to the design format of “Das Haus – Interiors on Stage”.

In Lyndon Neri and Rossana Hu’s work, there is less traditional Eastern flair and more of a pronounced modern and international style. However, their interior design and design objects speak of an aesthetic totally their own, a result of the western principle of reduction being applied to the huge diversity of Chinese form. Form and material seem to emerge from this encounter with a whole new sensuality.

Neri&Hu is regarded as the most progressive architecture studio in China and enjoys international success in the areas of design and interior design. Founded by Lyndon Neri and Rossana Hu in Shanghai in 2004, the studio is responsible for the development of hotels (Le Meridian in Zhengzhou, China), private residences (Cluny House in Singapore), museums, (Xi’an Westin Museum Hotel) as well as flagship stores (Camper, Shanghai). In 2012, Lyndon Neri and Rossana Hu opened Design Republik, their own design gallery in Shanghai; the studio also designs furniture for high-end European brands like Classicon, BD Barcelona or De la Espada. The design world’s attention has been drawn by the studio’s original and prize-winning re-design of an industrial-style 1930′s building into the Waterhouse Boutique Hotel. The Neri&Hu studio is currently developing projects in America and Europe, a global approach in line with the philosophy of the US-educated architects and which is further reflected in their international team.

The first three issues of “Das Haus” were interpreted by representatives from the design centres of London, Italy and Scandinavia. Their visions bore strong influences from the active design scene within the furnishing world. For 2015, imm cologne sought a view from outside Europe and, in Neri&Hu, found a partner who approaches the task from a wholly different perspective. As architects, they are just as interested in spatial relationships as in interior design. Nevertheless, by their own admission, their work as designers does have an impact on their architecture.