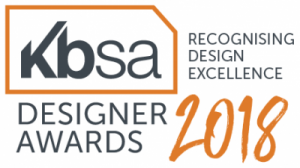 The Kbsa Design Awards 2018 are now closed for further entries and it promises to be a good year, so says Kbsa national chair Richard Hibbert.

“We are delighted with the response this year,” says Richard. “We have had more entries than last year in every category and initial indications are that the quality of entries is very good. Excellence in design is an important part of the ethos for Kbsa retailers and our awards are a great way to recognise and reward the talent in our industry.” Richard added further.

The awards will be judged by a new panel this year that is led by head judges Wayne Hemingway and Dr Vanessa Brady OBE.  They will lead a panel  that includes Martin Gill, managing director at And So To Bed Ltd; Rob Mascari, creative director, Mascari; Andrea Hillier, national retail services manager, Blum UK and Ainhoa Bilboa, kitchen designer at Bulthaup, Wigmore Street, London.

As well as new judges the 2018 Design Awards have a new enhanced rewards and recognition package.  All shortlisted projects will receive a personalised PR support package to maximise the promotion of their winning designs.  Winners receive a substantial suite of PR support aids, worth up to £1,000 to maximise local coverage.

There is also a financial reward for the Young Designer Award. The Young Designer winner receives a cash prize of £500 and at the judges’ discretion an additional award of £1,500 in the form of an educational/ training bursary.

The Kbsa Designer Awards categories include:

The winners will be announced at the Kbsa AGM Conference and Networking Dinner on Wednesday, September 12 at the four star Stratford Manor Hotel, located just five minutes from Stratford-upon-Avon.

The event starts with the exclusive retailer dinner on Tuesday September 11.  This will be followed by an all-day conference on Wednesday September 12.  New workshops and presentations will also be part of the day, which will culminate in the awards dinner in the evening.