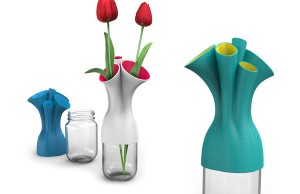 Karim Rashid has teamed up with Leapfrog for a 3-D printer that will produce seven of the designer’s own original works. The project is the first in the 3-D printer manufacturer’s upcoming series of designer collaborations and will allow consumers to print design objects from the comfort of their homes.

Each object encapsulates the designer’s signature organic style and includes a vase, wall piece, tea-light holder, smartphone speaker, fruit bowl, lamp and wine holder. Consumers can customize each item by using various colors of printing material, which come with the package, and by varying the scale of each object, giving them the opportunity to be the manufacturer.

Rashid says that one of the challenges in designing objects for the printer was making sure his designs were both attractive and functional. “Despite the enormous opportunities of 3-D printing, the language built around the technology is about the ability to create complex patterns and structures,” he says. “I wanted to keep the shapes sensual, minimal, and functional, and not just make it complex just because it can be complex.”

Rashid first started working with 3-D printers in 1999. Over the years he has designed and produced hundreds of prototypes and models on them and has seen first hand how this technology has evolved and the infinite design possibilities that come with owning one.

“I remember getting my first 3-D printer about 15 years ago and was always obsessed with this notion of creating objects that are robotically produced yet could be one-off,” he says. “With desktop 3-D printers becoming more affordable, DIY will soon stand for ‘Digitize It Yourself’,” he says.