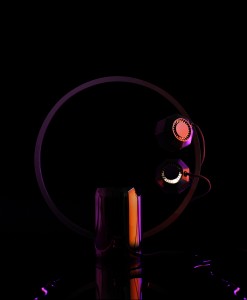 Part of a series by Jean-Baptiste Durand titled simply Lampes, Suns joins Mist and Transparent Landscape, a trio of lights the result of reflections, experimentation, and research on the subject of light. Says Durand, “I was interested in how can light be revealed, appear, fade. What does light say, mean or represent.”

The first lamp, Lampe Brume, mist in French, is “light captured by mist. The light comes to life through this natural reflector, although it is informal and impalpable.”

“The peaceful agitation of water becoming mist is set as a chemistry experiment and brings a lively and sweet light at home. At the bottom of the vase made out borosilicate doublewall glass, a nebulizer system turns water into mist.”

The second lamp, Paysage Transparent, transparent landscape in French, is a lamp fully made of PMMA, using Lumisheet technology as lighting surface.“Turned off, PMMA slabs are completely transparent. When switched on, the bumps of micro-machined thread catch the light coming from the LEDs on the edge of the panels.”

“A geometric landscape rises from the panels, as if they were lying on a giant rock.” The last lamp, Soleils, suns in French, sets two lights/suns on a ring that rotate at 24 hour intervals.

“At 00:01, the two spotlights are at the bottom left of the base. They diffuse a slightly red-tinted light, like a sun at dawn. Through the day, light gets whiter and reaches its zenith at midday. As the days gets closer to the evening, the light turns progressively to a light orange. The spotlights end their cycle at 23:59 and go back to their initial position. And so on” 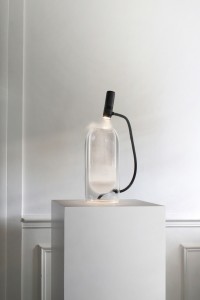 A soundtrack for the exhibition was also composed by the designer, as part of the scenography. Three tracks, working independently and as a ensemble; each track facing its lamp.

The Lampe family were showcased in Paris on April 7 and 28, 2018 at Espace Pecquay.