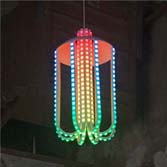 The LED technology has been a revolution for the light industry, a very popular, mass produced, and cheap product is the LED strip. The dotted lamp uses the LED strip to show that it can be transformed into a delightful, simple and elegant lamp. In this case the design was inspired by the colorful and freely floating, dreamy jellyfish, a marvel of nature.

Parren is known for lights with beautiful patterns that tell the story of light, colours, shadows and reflections. Dotted takes the lowly, mass produced and cheap LED strip, often hidden away behind panels or underneath surfaces, and elevates it.