Circu on Cloud 9 with Sky B Plane 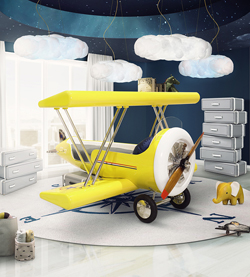 Once upon a time there’s was a little boy who was fascinated about the sky. His imagination was wild and his mind was always up in the clouds. The little boy, whose father is a pilot, asked his parents for a room where he could put his imagination into work and explore the many adventures the sky has to offer.

And that is where Circu Magical Furniture flies in with their Sky B Plane.

The Sky B Plane is an airplane kids bed with an aviation-inspired design that it’s meant to be educational and engaging. An airplane theme decoration for kids’ rooms is perfect to encourage the adventurous spirit of children.

Inspired by kids’ fantasy world, they will easily relate this kids’ themed bed to the Disney movie “Planes” character Leadbottom, an iconic biplane wing aircraft used in the early years of aviation.

The body is entirely made of fiberglass with glossy varnish applied and chrome plated finishes in the engine and wheels. The Sky B Plane has several storage compartments and the top wing is designed to be used as a bookshelf.

The decorative suitcases include secret storage compartments and allow an easy access to the bed.