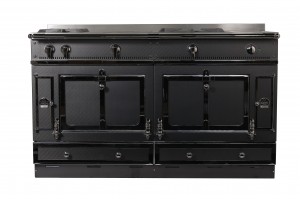 2014 marks the 50th anniversary of the first ever Château La Cornue created by André Dupuy. He was the son of Albert, the father of the vaulted oven and the founder of La Cornue in 1908.

To mark this anniversary, André’s son Xavier Dupuy wanted to pay a spectacular tribute to the original and exclusive vision the Château range incarnates. This version of the Jubilé will be released as a very limited edition, with only three per continent.

As a world première at the Milan Eurocucina trade fair, La Cornue presented an exceptional Château Jubilé 150 range. It is the ultimate masterpiece. A genuinely singular prototype of the Château, it is both traditional and extremely high-tech thanks to its carbon fibre panels highlighted with sophisticated detailing in black stainless steel.

In a traditional or conventional oven, the surface of the food is subjected to unequal temperatures depending on its distance from the top, bottom and walls. The right level of humidity plays a decisive role in preserving the qualities of the food during the cooking process. As a general rule, to maintain constant humidity inside an oven it is better to have a sealed door than to open the oven regularly to baste the food, which each time results in a significant loss of moisture.

In a La Cornue vaulted oven, the distribution and circulation of heat are regular and natural. The food is cooked in a constant atmosphere. The solid door is manufactured to seal the oven, maintaining the optimum level of humidity. All food cooked in these respectful conditions will stay moist and retain unrivalled subtlety and flavour.

Gas or electric, the latest generation La Cornue vaulted ovens are now controlled electronically, enabling extremely precise temperature settings, with 5 degree increments. A probe shows the temperature at the heart of the dish in real time.