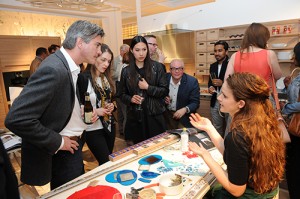 Over 200 interior designers and their guests joined the British Institute of Interior Design at Forza on London’s Great Portland Street last Thursday for the Institute’s Annual Summer Party.

The event, hosted in the Forza Showroom in partnership with leading Italian kitchen manufacturer Valcucine and Barzaghistore, the UK agent, followed the Institute’s highly successful staging of its third Annual Conference.

Members had plenty to enjoy, with food from Villandry, selected cheeses from La Fromagerie and fine wines from the vineyards of Treviso and Trieste.

The atmosphere in the showroom was electric as the guests reflected on the talks held throughout the day. Always a great opportunity to network and meet old friends, the Summer Party this year even catered to those wanting to watch England play Uruguay at the world cup – fortunately England’s defeat failed to dampen anyone’s spirits!