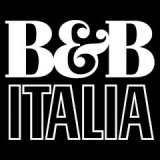 Celebrating the company’s 50th anniversary, B&B Italia will present The Perfect Density: a big pulsating brain whose synapses surround the visitor in a dynamic tale.

An exhibition designed by Migliore + Servetto Architects, it is an unexpected interpretation of the extraordinary path of B&B Italia through creativity, technology and innovation, as well as commitment to spreading the culture of design and living in the world.

The focus of 2016 B&B Italia’s presentation at the store in Via Durini will be the living area, with new projects by Antonio Citterio, Doshi Levien and Naoto Fukasawa, and the public spaces, with proposals by Jeffrey Bernett and Jasper Morrison. The outdoors is also an important area, thanks to the new series Gio by Antonio Citterio.

Elegant proposals for Maxalto will be presented through a series of new storage units, in addition to the expansion of ranges and finishes for existing products in the collection.
The Via Durini store will also have special screenings every hour of the documentary film “B&B Italia. Poetry in the shape. When design meets industry.”