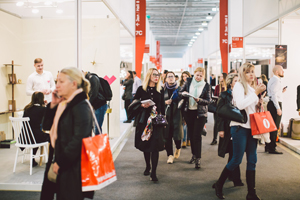 In the run-up to the 14th edition, the Salone del Mobile.Milano and SaloneSatellite are returning to Moscow from October 10 to 13 at Crocus Expo-2 with renewed enthusiasm, consolidating the drive towards internationalisation that began many years ago and underscoring its aim to achieve primacy in an important market. Its focus on taking the experience and capacity for innovation from Milan and its Salone to capital cities like Moscow, is borne out by a new name: from this year onwards the event will be known as the Salone del Mobile.Milano Moscow. Equally, the Russian event will be held under the same publicity banner as Milan – Good Design! –  thus maintaining a relationship and ongoing dialogue with its own public.

More than 250 companies will be exhibiting in Pavilions 7 and 8, seeing the event as a great opportunity to gain a foothold in the Russian market and that of the former Soviet Republics, which are showing an increasingly keen interest in quality products, be they classic, design or luxury pieces.

The Master Classes will be held again this year. The speakers, moderated by Olga Kosyreva, CEO and Founder of Design Lectorium, are Ferruccio Laviani (10th October), Fabio Novembre (11th October) and Mario Bellini (12th October). Following its debut last year, the Work Talk will be back given by Katerina Lashmanova, an affirmed young interior designer, who will discuss contemporary Russian design.

More than 30,000 visitors are expected – professionals, general public and press – who see the event as the only vehicle for quality furnishing on the Russian market, thanks to its vast array of goods – ranging from furnishings to upholstereds, lighting systems, kitchens, offices, accessories, bathrooms and textiles.

Thanks to its partnership with the Salone del Mobile.Milano Moscow, ICE – the Italian Trade Agency – will be bringing a delegation of 140 buyers, operators, distributors, architects and interior designers from the Russian Federation, Armenia, Azerbaijan, Belarus, Georgia, Kazakhstan and Uzbekistan to the event.