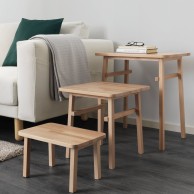 Ypperlig collection, the collaborative project between IKEA and Hay, was first announced during IKEA’s Democratic Design Day event in Sweden last year. Due to be released in October 2017, a set of images have been released that show the full range of furniture and homeware products from their collaboration.

The idea behind this collaboration was to come up with pieces that challenge people’s perception of IKEA quality and design.

Rolf Hay said, “We learned a lot of things from this collaboration that we can apply to our own company: the simplicity in the IKEA supply chain, and making something that’s complex more simple and therefore better and less expensive. We also learned a lot about creating the best tools and strong solutions, and dealing with flat-pack challenges.”

The collection of more than 30 pieces ranges from furniture to small accessories including vases, candle holders and blankets. Key pieces in the collection include Hay’s take on a Scandinavian plank table, and a sofa inspired by a vintage 1950s piece but made from a single moulded piece of foam.

It also includes Hay’s redesign of IKEA’s iconic blue and yellow Frakta bag, made from a white and forest-green woven fabric, with forest-green straps.

Mette Hay shared, “It’s one of the most known and used IKEA products, but one that no one appreciates as a design object. We kept its measurements and updated it in new patterns and colours. It’s a celebration of this iconic product.”

Hay is the latest in a series of designer collaborations for IKEA. The company launched a collection by British designer Ilse Crawford in 2015 and is also working with Dutch designer Piet Hein Eek on limited-edition furniture.